The spirit of travel:

This 10-day journey will give you will be pleased by the harmony of nature, religion and history with the local Cambodian life. The mix of antiquity and morderness of Phnom Penh, Siem Reap and Battambang may make you astonished. Cannot forget to experience the stunning, natural scenes of Angkor temples, Kampong Thom, Oudong,… Deeping in the nature, every tiredness will be left behind. 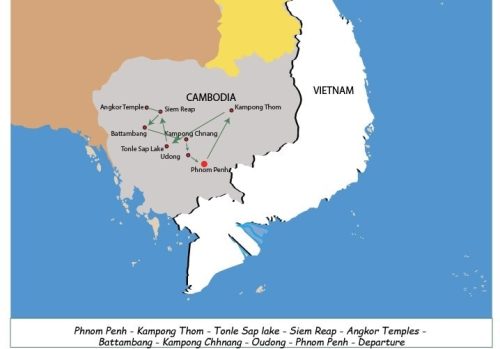 Upon arrival at Phnom Penh International Airport, you will be greeted by your guide and transferred to your hotel.

Phnom Penh, the vibrant capital of Cambodia is situated at the confluence of three rivers, the mighty Mekong, the Bassac and the great Tonle Sap. Phnom Penh still maintains considerable charm and tranquility with French colonial mansions and tree-lined boulevards amidst monumental Angkorian architecture.

Free time for your first glimpse of the town on your own.

Start your day with the visit to the Royal Palace that includes the official residence of the royal family with parts of the massive palace compound, partially opened to the public. Wind your way to the nearby Silver Pagoda that boats many national treasures including many golden and jeweled Buddha statues. Its original name is Wat Prakeo means Temple of the Emerald Buddha.

In the afternoon, explore two of Phnom Penh’s most famous temples: Wat Ounalom Temple and Wat Phnom Temple. Founded in 1443s and inclusive of 44 structures, Wat Ounalom Temple is locally known as the headquarters of Cambodian Buddhism. The temple suffered serious damage during the Pol Pot era, but today it has come back to life.

Continue to the hillside temple of Wat Phnom that lent the Cambodian capital its name. The temple was originally built to preserve four statues of the Buddha that had been discovered in the heart of the Mekong River

If time permitted, we round off our day with a walk in the Central Market, a showcase of the local product richness. This flagship trade center of Phnom Penh was built in shape of a dome with four arms branching out into vast hallways crammed with  countless stalls of goods.

The northbound journey begins as we leave Phnom Penh and travel into the countryside of Cambodia. En route we make a stop at Skuon, an important junction for Kratie and Stung Treng in eastern direction and Kampong Thom in the northern turn. This small town is famous for the tasty spiders that are sold around your stop.

We head towards Kampong Thom where rice fields stretch out in the distance and surround sleepy villages. The roads begin to deteriorate as we leave the country path and drive towards Sambor Prei Kuk. This mysterious ruin is dotted with hundred pre-angkor styled temples, which boast some of the oldest structures in Cambodia. Today we have plenty of time to explore the local life as we stroll around to Sombor Village and experience everyday life in rural Cambodia.

Morning depart to Siem Reap. En-route, we will enjoy a boat ride on the Tonle Sap lake at Kampong Phluk Village. This is one of the most impressive and untouched permanent settlements on the Tonle Sap Lake. This stilted village is the best place to see the authentic life of the local fisherman and their families who live amongst the flooded mangrove forest. Along the way enjoy the views as the local community goes about its daily life.

Arrival to Siem Reap in the afternoon and turn to the exciting exploration of Angkor Complex begins with the Roluos Group, dating back to the 9th Century reign of King Indravarman. There are several remaining temples, including Lo Lei, Preah Ko and Ba Kong, which are mostly built by the end of the ninth century. The oldest temple of Preah Ko was dedicated to the Hindu gods Shiva and Vishnu while Lo Lei was built on an artificial island, to honor the ancestors. We have a look at these two small temples before we pay a visit to Ba Kong, the first large mountain temples in Angkor.

We start this day tour with Angkor Thom, an epic collection of striking structures encompassed in quadrangle area. The walkway leads us to  the Royal Enclosure where remains some  mysterious ruins, including the Royal Palace, Phimeanakas Temple, and  Royal Terraces. These structures built from perishable materials have long vanished. The memorable climax of our visit is Bayon Temple  built in the centre of Angkor Thom. This enigmatic complex contains  54 towers, each topped off with the four faces of  Compassion Buddha.

Upon leaving Angkor Thom Area , we take a short drive to  the architectural masterpiece of Angkor Wat - one of the modern wonders of the world. Be amazed by the sheer size of the temple and learn how the Khmer Empire prospered between the 9th and 13th Century, around the time when the temple was built.

We round out day tour with a walk up the Pre Rup Temple to enjoy the spectacular sunset over these sandstone monuments.

This evening, be picked up at the hotel for a Cambodian Street Food Discovery. Transfer by local tuk-tuk to the local night market to enjoy the tantalizing sights smells and flavors of local specialties. Stroll through the alleys and side streets around Psar Chas area (Old Market) area to savor real Cambodian snacks, carefully selected for cleanliness and standards as the local people do, including pancakes, fruit shakes grasshoppers, spiders, cockroaches, or crickets. Followed by a local beer if you so wish to wash all the tasty morsels down. Then, head to a local restaurant to sample some traditional Cambodia dishes that are created based on your allergy restriction.

Today, drive out to visit the Banteay Srei that translates to “the Citadel of the Women”. Originally constructed in the 10th Century and dedicated to the Hindu god Shiva, this red sand-stone temple is one of Angkor’s most significant structures as its walls are decorated with elaborate carvings which have been remarkably well preserved.

Continue on your exploration of the famous jungle temple of Ta Prohm where several shots of the adventure movie “The Tomb Raider” were filmed. This beautiful Buddhist temple was not restored and looks just as it did when French explorers stumbled it in the 1860s. The magnificent tree roots have merged over the centuries with the temple’s huge stone blocks, emphasizing a ‘forgotten city’ feeling.

Visit the Angkor Silk Farm 15 km west of Siem Reap, where you can witness the entire process of silk creation from the breeding process and life cycle of the silkworm to the spinning of the silk, the dying process and the creation of beautiful silk weavings on wooden hand looms.

Tonight attend a performance from Phare, the Cambodian Circus. Starting at 8pm, professional artists of Phare Ponleu Selpak (PPS) will perform an inspiring show suitable for people of all ages. An hour-long Khmer cultural show, professional artists mix traditional and modern forms of theatre, music, dance, acrobatics, juggling and contortion to perform a story about Cambodian lives and society.

Head out of the town we travel to Battambang Town in northwestern Cambodia and make a stop to see Carving Village and Sisophon Market.

On arrival in Battambang, we check in hotel for a rest before exploring Phnom Banan, one of the famous sites in Battambang. This hill trop sanctuary is still keeping its old date architecture although it has fallen victim to massive looting. The long staircase uphill requires some physical preparation; however, the beautiful view of the winding Sangker River set amidst sugar palm trees, rice fields and small villages make the hardship all worthwhile.. We drive back to Battambang Town and spend your free time walking along the main street

This morning, we depart for a guided tour of the city. Transfer to tuk tuk to the ‘Bamboo Train Station’, where we will board a bamboo ‘train’ for the 8-km journey, passing local houses, rice paddies and admire the beautiful landscape along the ride. Disembarking, we continue with an Ox-cart ride to visit an ancient house and agricultural village, growing rice and a variety of naturally-grown tropical fruits.

Continue to the local NGO (non governmental organization) “La Maison de Coco” , specializing in silk and rattan weaving, before returning to our hotel. The remainder of the day is free at leisure.

Depart early for the transfer from Battambang to Phnom Penh. Your first stop is Kampong Chhnang, known for its traditional pottery, with many kilns at work in this province. Stop in a village near Kampong Chhnang town to see the different aspects of pottery making and also experience the production of traditional rice wine.

Continue to Oudong, the former royal capital of Cambodia after the fall of Angkor. The drive passes through many rural villages and pagodas until you see the temple mountain with its dozens of stupas from afar. Upon arrival at Oudong, enjoy a traditional Khmer lunch at a picnic hammock huts at the foot of the hill.

Then, climb the stairs to the top of Oudong Mountain and enjoy magnificent views over the plains below.

On the way to Phnom Penh, visit Koh Chen, an island in the Tonlé Sap River that you can reach via a new bridge. Koh Chen is known as the ‘Silver Village’ for its production of silver crafts and jewelry. Stroll through the village to see the many silver workshops in the local families’ houses.

Arrive to Phnom Penh, check in to your hotel and free time.

Having breakfast at the hotel, you will have time to enjoy the last moment in Phnom Penh. Then, return to the hotel to check out and then transfer to the airport for your departure flight.

The hotels offered by Horizon Vietnam Travel are classified from 02 to 05 stars at the international standard, and comfortable with all the required services.

+ Standard Category: 2 stars. The rooms are correct, clean, and equipped with a bathroom, satellite television, and air conditioning.

+ Superior category 3 stars. The rooms are generally spacious, and the services and facilities are more numerous.

+ First class category: 4 stars. The rooms are luxurious and spacious and have a wide choice of quality services.

+ Deluxe Category: 4-5 stars. Hotels are of excellent comfort and have a wide range of excellent services. (swimming pool, spa, jacuzzi…).

+ On the other hand, we have developed fair tourism, through contact with the local population, the possibility of sleeping with the locals and sharing their daily life. The conditions of these accommodations that we offer you are well insured and with the best possible conditions.

Horizon Vietnam Travel gives you an estimated price per person on our website for the group of six people in low season with standard 2 and 3-star hotels.

The price of this trip varies according to the services chosen (category of accommodation, activities during the trip,...), the tourist seasonality of the year (Christmas and end of year holiday, Lunar New Year holiday in Vietnam), the booking delays and especially the number of participants of your group you wish to travel with.

Please note that Horizon Vietnam Travel only organizes private "tailor-made" trips for groups from 2 persons. We generally propose an offer including all the services on the spot from your arrival until your departure.

Depending on your wishes and your budget, this tour can be adapted and modified in terms of duration, content and departure date.

HORIZON VIETNAM TRAVEL calculates its prices as closely as possible in order to guarantee you the best price/quality ratio.

Our advice: the earlier you book, the better your chances of getting good rates, especially for air services, think about it!

Note: The price of international flights is not included in this estimate.

Please note that this tour is only a first draft and you can also customize it according to your wishes. We remain at your disposal to build your trip perfectly to your expectations and your budget

To obtain a detailed and personalized estimate, please contact us to request an estimate.

Related to the trips you watched 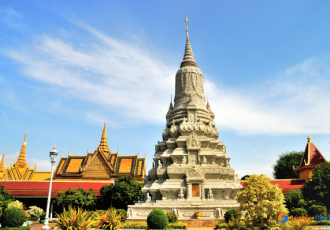 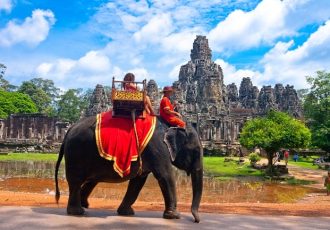