Vietnamese architecture was carried by several godfathers who influenced it: Chinese in the north, Indians and Khmer in the south, it is first in the layout of cities, palaces, temples, imperial tombs and communal houses that we discover traditional Vietnamese architecture. Cities, tombs, and palaces were drawn according to very precise astrological and geographical criteria. To determine the site, we applied here the “geomancy” science taking into account the configuration of the stars at the time of the search for the site, and also, sometimes, stories of Yin and Yang (the image of two dragons bowing before the sun at the top of the roof): It is a fusion, a harmony with nature quite exceptional, allying itself with the charm of the site and the mystery of all these calculations and parameters…

In cities like Hanoi and Hue, the great imperial tombs, the temples of Hoa Lu etc. responded to this architecture. The encounter with Buddhism allowed Vietnamese architecture to enrich itself and detach itself from Chinese influence.

From a technical point of view, what took precedence was the roof. So the architects focused all their efforts on the pillars and the frame, fixed with two pegs (without nails) and carved abundantly, unlike the Chinese frame which was above all lacquered. The walls were often just fillings of wood and brick. It is above all the temples that express this autonomy. Built in the shape of “H” “noi cong ngoai quoc”, surrounded by walls on three sides and a large portico on the front, they correspond to Vietnam. Later, it was in the construction of communal houses (dinh) dedicated to the geniuses protecting the village, that Vietnamese art was fully expressed, especially from the seventeenth to the nineteenth century.

As for pagodas (chua), they often have the same plan: Three rooms in parallel connected to the middle by a corridor or small bridges. The first, is like a vestibule with two immense geniuses (the good and the bad) or Happiness and Misfortune, as well as other small protective geniuses). In the middle, the perfume burner, the trays of offerings, the huge prayer bells in the shape of carp. In the last room, we find the representations of the most famous mandarins and monks and the Buddhas of the present (sakyamuni), the past and the future (maitreya).

Of course, we use the materials offered by nature: Wood, bamboo, palm, and rice stubble. It expresses two influences: On stilts, here too, the frame is the most important element of the construction. Often the roof is covered by thatch, red tile, or wood (black Hmong).

Modern Vietnamese architecture is distinguished by the French colonial style with neoclassical Haussmannian reminiscences, Art Deco or Cabourg villas style. It was relayed at independence by the neo-Stalinist Soviet architecture, one of the most beautiful jewels of which is the Hanoi City Hall. In short, as a Vietnamese intellectual said, the civilization of Vietnam is a thousand years of French civilization.

The art of Vietnamese home decoration

Modeling has created a decorative art, with a rich philosophical content (when Western decorative art usually focuses on visual beauty, without any need for meaning)

In the whole of Tu Linh (the four fabulous animals), we find Long (the dragon), the symbol of domination, strength, male character: Ly (the dragon-horse) or Lân (the unicorn) symbol of the desire for peace, the turtle symbolizes longevity and the phoenix, symbol of happiness; the dragon-phoenix couple with the pair “dragon-saurian” and “bird-immortal” symbolizing the happiness of the couple.

In Vietnamese architecture, the dragon is not the prerogative of kings or emperors. It is so popular that everywhere in the countryside it is found. It is part of the laborious life of the peasant, giving birth, giving birth to large offspring, and so docile that women in skirts manage to dance on their backs. This shows not only the democratic character of Vietnamese culture but also the degree of popularity of the dragon.

The four fabulous animals are combined with four other beasts to form the eight animals. They are Ngu the fish, Phuc the bat, Hac the mythical crane and Ho the tiger. They are often presented in Vietnamese architecture.

The fish, linked to the legend of the “fish that turns into a dragon”, symbolizes success. The Chinese name of the bat is Buc symbol of happiness. The crane, a rare and beautiful bird, embodies bliss, the wonderful countries, where there are cranes, there are immortals. The tiger represents strength and is usually worshipped to fight ghosts, evil spirits and evil influences. 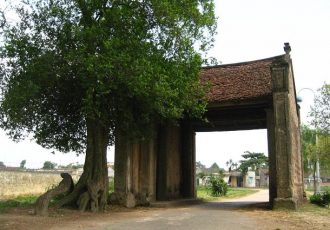 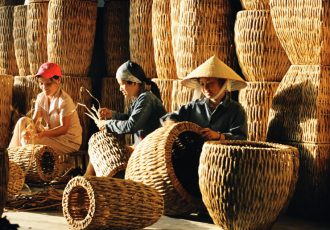 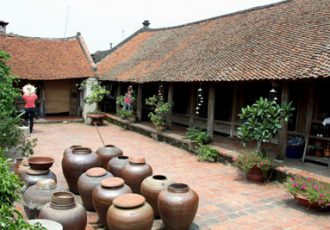