Vietnamese celebrations are often misunderstood in the West… Although the Vietnamese people place a lot of importance on work and education, they are also warm and festive people!

Holidays in Vietnam are an opportunity for Vietnamese people to gather with family and friends and to unwind from the pressure of everyday life. These events are particularly appreciated as they are often synonymous with public holidays.  Officially in the private sector, there are only 12 days of paid holidays, so Vietnamese people enjoy these non-working days with relish.

Holidays during the festive season are not always easy. A lot of preparation, especially culinary, is often required to organise these large gatherings.

Most Vietnamese holidays are based on the lunar calendar. Therefore, to better understand the timing of these events, we advise you to read our article on the Lunar and Solar Calendars in Vietnam.

Let’s take a look at all the festivals in Vietnam. 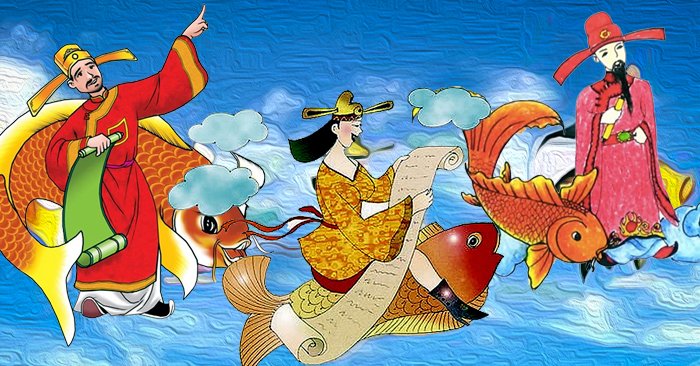 Period of the event : January – February

This event takes place near the end of a lunar year. The 23rd day of the last lunar month.

As the name suggests, the genie of the home is celebrated during this festival! This genie is known as “Ông Táo”. He is in charge of reporting on the behaviour of the Vietnamese inside the home. He will report to the Jade Emperor who is in the heavens!

The genie of each Vietnamese household goes up to heaven on the 23rd day of the last lunar month to report to the emperor. This date often coincides with January or February of the solar calendar. He will return to the homes on the night between the old and new year.

This report is very important because it can modify destiny, prolong or shorten the life of families depending on behaviour.

According to legend, the genies ascend to heaven in the form of a carp. So the families put live fish in improvised aquariums next to the ancestors’ altar on the day of their ascent to heaven. They are released into the river or lake near their home. In heaven,

the genies will report to the Jade Emperor on the family’s situation throughout the year. We make offerings to them because we hope that he will protect the family, so that it will always be prosperous and happy!

Period of the event : January or February

The main time for family gatherings is on the first day of the New Year and throughout the week that follows.

In fact, there are three kinds of trees to celebrate Tet:

In the north, the kum quat is often favoured, the green leaves of the kumquat and the golden fruits are a sign of wealth, of the new year heralding a good harvest, prosperity, and abundance of vitality for the new year! 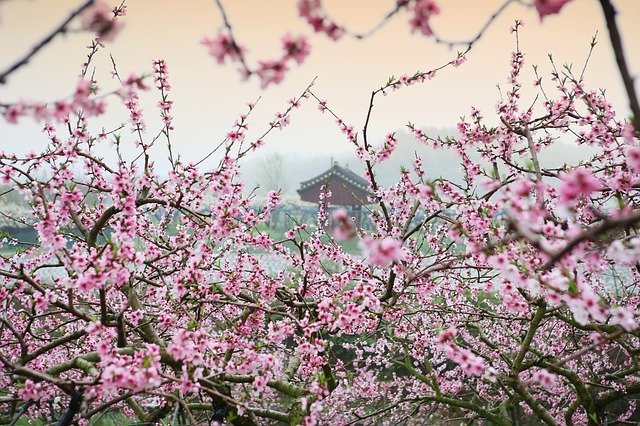 The peach blossom embodies renewal and flourishing. On each flower, you can count a hundred blossoms or buds. This flower brings intimacy, joy and hope for a new year full of peace and prosperity. 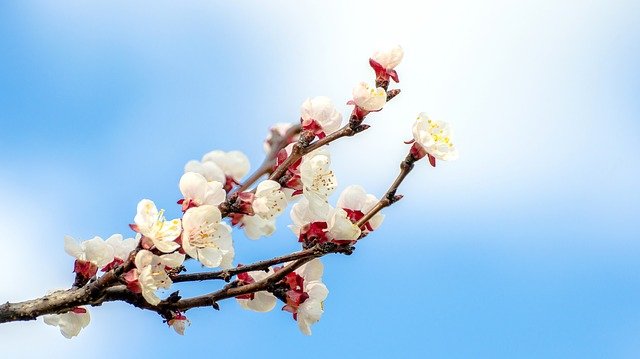 The apricot flower (Ochna integerrima) is the most popular species in the south of the country. This bright yellow, multi-petaled flower symbolises luck, happiness and prosperity for all households. Its colour also brings serenity to the home, as the inhabitants believe. On the other hand, this flower only blooms in spring in a mild climate.

For more information on Tet in Vietnam, please see our dedicated article.

The Trung Nguyen festival in Vietnam 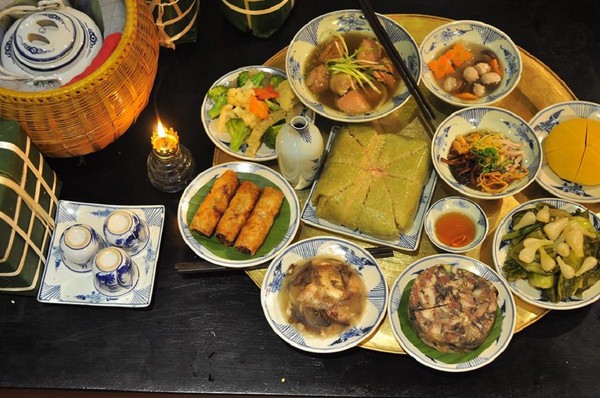 Period of the event : June or July

The Trung Nguyen festival is also known as the Vu Lan festival.

It is also translated as the ghost festival or the celebration of wandering souls. The date of the event is the 15th day of the seventh lunar month.

In fact, the ancestral festivities of the Vu Lan and Trung Nguyen rites begin one or two weeks before the 15th day of the seventh lunar month. The Vietnamese will fill the altars of the ancestors with gifts in the form of food, clothing, and votive paper objects which will be useful in the other world.

According to the legend, the offerings to the deceased will land in the other world thanks to a celestial boat. At the latest on the 15th day of the 7th lunar month. The offerings must therefore be ready before the fateful day.

So each family takes care to prepare a hearty meal to offer to the wandering souls.  But don’t worry, all these delicious culinary preparations are then enjoyed by the family once the boat has passed!

Period of the event: February or March

The Lantern Festival takes place on the first full moon of the lunar year.

On this occasion, the Vietnamese go to the pagodas to pray.

This festival is one of the four most important full moons for Buddhists: after April 15

During these three other full moons, Buddhists and Vietnamese will go to the pagoda to pray

The Lantern Festival is more popular than the other three celebrations. On this occasion, the pagodas and streets are decorated with lanterns. After the religious prayers, in the evening, people stroll through the streets to enjoy the lights. This gives a very special and charming atmosphere to every place in Vietnam. This festival is particularly popular in Hoi An, the city of lanterns…

The Trung Thu festival (mid-autumn in the 8th month) 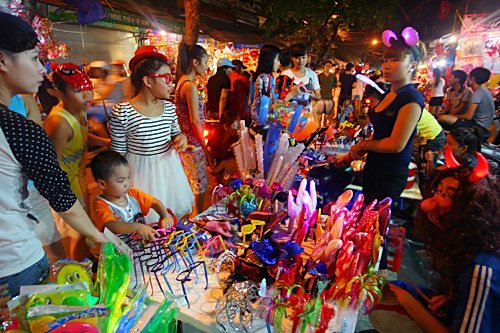 Period of the event: September or October

The Mid-Autumn Festival is celebrated on the evening of the 15th day of the eighth lunar month, which may vary from year to year. Usually in September or October.

On the day of this festival, the full moon is the roundest and brightest of the year, symbolising family unity and togetherness.

Almost a month before the festival, a multitude of small shops with colourful fronts appear on the four corners of the streets. This is the place to buy the famous mooncakes, which are essential to celebrate the event, and traditionally, you can eat them a week before the official day of the festival!

This tradition can be compared to our “galette des rois” which we eat throughout January.

The composition of the cake is very varied, lotus seed, walnut, durian paste, red bean paste, date puree, pineapple puree, soya puree… there is something for everyone!

Têt Trung thu, the full moon festival, is also becoming the most important festival in the children’s calendar. All kinds of objects, lanterns in the shape of stars, masks of legendary characters, lion heads, torches and multicoloured toys abound in the districts for days.

Traditionally, it is the grandparents and parents who prepare gifts for the children themselves. But in reality, in the city, the shops rule!

The Mid-Autumn Festival is a time of joy for children. On the evening of the full moon, they take to the streets to participate in lantern processions. The streets come alive with the sound of tambourines and unicorn dances. The girls wear pompom headbands and butterfly wings, the boys wear masks, and all parade with their lanterns through the alleys and crowded streets of the city centre.

Late in the evening, in every family, parents organise “sweet Christmas parties” for the children. On the trays, in addition to the traditional cakes, there are seasonal fruits such as grapefruit, persimmon, banana and orange. The Mid-Autumn Festival is an opportunity not only to eat and play but also to learn. Under the shining moonlight, gathered around a tray of fruits and sweets, grandparents or parents tell children legends: the one of the beautiful Hang Nga or the one of the big evil Cuôi, whose traces are clearly visible in the big autumn moon.

Of course, this is the most popular holiday in Vietnam!

Period of the event: March

Tet Han Thuc is the festival of cold food!  It is a traditional Vietnamese festival that takes place on the third day of the third lunar month of the year. It is an opportunity to gather with family and remember the ancestor.

On this day, all family members gather at the family house to cook “banh troi” and “banh chay” together.

“Banh troi” and “banh chay” are two traditional dishes of Tet Han Thuc in Vietnam. The former are spheres made of glutinous rice flour with a sugar cube inside. Banh chay is larger than “banh troi” and contain sweetened green bean paste instead of a sugar cube.

Once prepared they will be placed on a tray near the ancestral altar.  The householder will burn incense to invite the ancestor to enjoy the festival with the family. Then the whole family will eat together.  These sweets are usually accompanied by coconut and sesame.

In some parts of Vietnam, people also make “banh rom” on this day. “Banh rom” shares similar characteristics with “banh chay”. The coat is made of glutinous rice flour with a sweet green bean paste inside. “Banh rom is usually wrapped with a piece of banana leaf.

Period of the event : June

Among the festivals in Vietnam, here is a little known festival outside Vietnamese!

The 5th month of the 5th lunar month is the Bai-Yue festival in the south, to mark the hottest time of the year.

Besides, the 5-5 festival usually falls around the summer solstice. As heat is Yang, this tet is still called Doan Duong (Extreme Yang).

It is said that heat is synonymous with disease, which is why this event is also called “The festival to eliminate vermin and parasites”.

Thus, on this day, it is customary to consume glutinous rice alcohol in the early morning (to intoxicate the “parasites” inside the body), then to eat acidic fruits to kill them. On the other hand, on this day, we dye our fingernails and toenails with medicinal plants (a kind of henna) to protect them (and make them look pretty too!!).

We hope you enjoyed this article on the Vietnamese holidays! 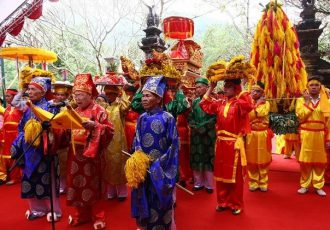 Cultural activities in general, and the village festival in Vietnam in particular, are the best… 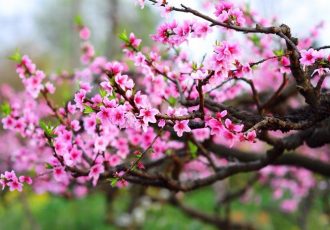 The TET (Tet Nguyen Dan) festival It is the most important holiday in Vietnam, the…