The interest of Dak Lak

Located 1410 km from Hanoi and 320 km from Ho Chi Minh, the capital of Dak Lak – Buon Ma Thuot, might be one of the most famous destinations in Vietnam and the place where you can find the best coffee in Vietnam. Southeast Asia.

The province of Dak Lak covers an area of ​​13085 km2 (3.9% of the area of ​​the whole country). Part of the southwestern slope of the Annamite Range, Dak Lak has a predominantly mountainous topography (35% of its area is highlands and mountains). The average height is 1000 to 1200 m; the highest peaks are Chu Yang Sin (2442m), Chu H’mu (2051m), Chu De (1793m) and Chu Yang Pel (1600m). In the middle of Dak Lak, one can find a flat expanse of highlands that covers 53% of the natural area, with an average height of 450m. The rest of the province is in lower areas. Another notable fact is that 1/3 of the area of ​​Dak Lak is basalt, a valuable type of land allowing the province to develop coffee, rubber, pepper,

Where is Dak Lak located?

Dak Lak is a province located in the center of Tay Nguyen. It is surrounded by the province of Gia Lai to the north, Lam Dong to the south, Dak Nong to the southwest, Phu Yen and Khanh Hoa to the east, and Cambodia for 70km to the west.

Dak Lak is one of the provinces of Vietnam with the greatest tourist potential, thanks to its many historical and natural sites, but also thanks to its culture and its typical traditions, anchored in the habits of the inhabitants. One of the examples is Buon Don, a village that has been put on the world tourism map due to its traditions. It has magnificent waterfalls: Thuy Tien, Trinh Nu, Krong Kmar, Bay Nhanh, and large lakes like Lak, and Dak Mil. Tourists who come to this province can go hiking in the primitive forests of Chu Yang Sin, and Yok Don National Park. You can also observe historical remains such as Bao Dai Palace, Yang Prong Tower, Buon Ma Thuot Prison, or Dak Tua Cave.

Coffee can be found in most districts of Dak Lak, but the coffee planted in Buon Ma Thuot is by far the most popular thanks to its unique and typical flavors. This explains why the Café Buon Ma Thuot brand is known worldwide. The city is also considered one of the capitals of coffee. This coffee culture is entirely part of the region’s traditions and history.

A province whose culture is recognized by Unesco

The culture of Dak Lak translates into different art forms: music, languages, stories…. Dak Lak is also part of Central Vietnam’s Space of Gong Culture, which was recognized by UNESCO as a World Heritage Site in November 2005. Locals can also be proud of their architecture, with hundreds of traditional longhouses with each piece made by hand.

The “Elephant Race” festival takes place in the spring in Buon Don or in the forest above the Serepok River, between around March 22 and 26. The Ede tribe organizes this great festival for all the young boys who pass into adulthood.

Find out what there is to do in Dak Lak by reading our guide to Dak Lak and Buon Ma Thuot! 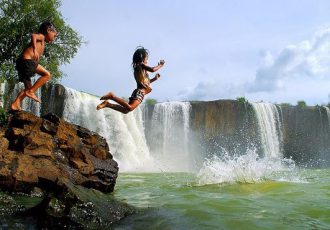 Once a small, rustic town and the site of a decisive battle in the Vietnam…