Located inside the Hue Citadel, The Imperial City plays an indispensable role in protecting the most important palaces of the Hue Court, the temples of the ancestors of the Nguyễn family and the Forbidden Purple City (the dwelling of the Emperor and the royal family). 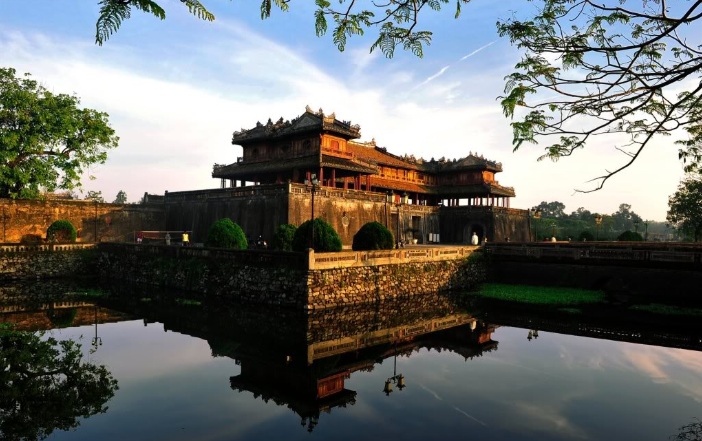 The construction of the Imperial City began in 1804, and finished in 1833 with a system of 147 monuments during the reign of Emperor Minh Mạng.

Its platform looks like square with each side 600 meters. The walls are built of brick, with 4 meters high and 1 meter thick. Around these walls, there is a trench and four gates corresponding to 4 directions: the Midday Gate (Ngo Mon) in the South, the Hien  Nhon Gate in the East, the Chuong Duc Gate in the West and the Peace Gate (Hoa Binh) in the North. The bridges and lakes outside have the same name: Kim Thuỷ (golden water).

The entire palace system of the Imperial City is connected by a symmetrical axis. The imperial monuments are located on this axis. The two-sided buildings are strictly divided by region, following the order (from the inside): “man on the left, woman on the right”, “civil on the left, military on the right”. This order is also applied in the temples

Despite the large number of monuments in the Imperial City, they are set in a green area with large and small lakes, gardens, bridges and multi-year plants. The scale of the buildings is different, but their architecture and decoration are similar.

Regions in the Imperial City

+ The Noon Gate: the main gate of the City, the place the Parade Festival, the Lunar New Year Festival… were held

+ The Palace of Supreme Harmony: where the Great Meetings were held twice a month (the 1st and the 15th in the lunar calendar), the Coronation, the Emperor’s Birthday Party, the National Day…

+  Cân Chanh Palace: where meetings were held, banquets and hosted delegations. It was destroyed in 1947

+ Can Thanh Palace: the emperor’s palace

+ Khôn Thai Palace: palace of the Vice Queen (the emperors of the Nguyen dynasty did not have a queen, except for Emperor BảoĐại)

+ Royal Library and other monuments to satisfy the daily needs of the imperial family for example the Royal Theater (DuyêtThiĐuong), ThuongThiênĐuong (dining room)…

Located in the courtyard of the Nguyễn Emperors’ Temple of Worship, these nine bronze urns are the largest in Vietnam.

Inspired by the nine Urns of China, in 1835, Emperor Minh Mạng ordered the Cabinet of Ministers to cast the nine Urns with the Ministry of Works. The inauguration of these nine Urns was organized on March 1, 1837.

The nine Dynastic Urns are named corresponding to a sign of each emperor of the Nguyen Dynasty. At the top of each urn, 17 patterns and one design per theme of the universe, nature, animals, products, weapons… gathered in the panorama of a unifying Vietnam during the Nguyen Dynasty.

According to the Asian culture, the nine Urns represent the feudal power. 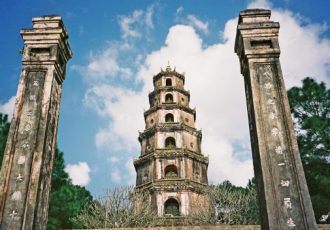 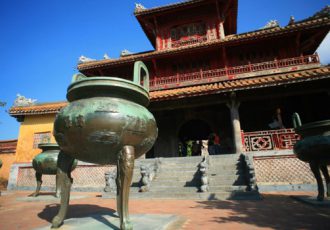