The cult of fertility

The origin of the cult of fertility

In Vietnam, the cult of fertility has existed since the dawn of time. Maintaining and multiplying life has been man’s primary need. For a crop of agricultural origin, these two aspects are doubly important. 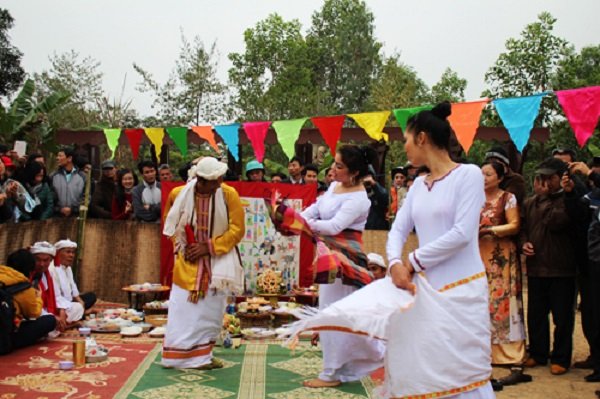 To sustain life, harvests must be abundant. To develop it, man must multiply. In the type of cultivation, the two concepts: producing rice to sustain life and producing men to maintain space are of the same nature. It is the alliance of the two elements of different natures (earth and sky, father and mother where yin and yang).

The result is the appearance of a cult of fertility (tin nguong phon thuc, phon = fertile, thuc = multiplication). In Vietnam, this cult has endured throughout history and can take two practical forms: Veneration of the male and female sexual organs, and worship of the sexual axis.

The cult of the male and female sexual organs is called the cult of “sinh thuc khi” (spirit of reproduction). It is the simplest form of the cult of fertility, widespread in all agricultural crops in the world. Male and female figures with sharp sexual organs have been found on stone carvings from several millennia BC, drawings engraved on ancient stone blocks in the Sapa Valley. The decoration of funeral homes in the Highlands of central Tay Nguyen often includes figurines.

In many places, the cult of No Nuong (No= the corner, symbolizing the phallus and Nuong = arequier spathe of oval shape, sybolisantla vulva, is practiced. At the village festival of Dong Ky (Bac Ninh) there is the traditional procession of the sexes (made of wood) on the 6th day of the first month of the year. At the end of the procession, the two objects are burned and the ashes are shared among all the inhabitants to bring good luck.

The worship of the sexual organs is still practiced with natural stone columns, or carved, with possibly inscriptions, erected in front of temples, chapels, communal houses or pagodas, or all kinds of hollows (holes or slits at the foot of centuries-old trees or caves and caverns in the walls of mountains).

Alongside the veneration of the sexual organs (= element), similar to many other populations of farmers, rice farms in flooded terrain, with their spirit that emphasizes relationships, still have the habit of venerating the sexual act.

On the lid of the bronze jar found in the village of Dao Thinh (Yen Bai) dating from 500 BC) around the image of the sun (as on the bronze drums), there are images of 4 couples having sex. Now, when funeral homes in the Central Highlands are built, statuettes of boys and girls practising the sexual act are often installed in a completely natural way, with enlarged organs.

There are also many images of animals and birds mating on the body of Vietnam’s bronze drum dating back 3000 to 4000 years that we found throughout the Red River Delta.

On the occasion of the great feast at the Temple of the Hung Kings (the first dynasty of Vietnam), the dance “Tung Di” is perpetuated: boys and girls dance sensually. With each stroke of the tam-tam that punctuates the dance, they raise the objects held in the hand and make them collide (di) 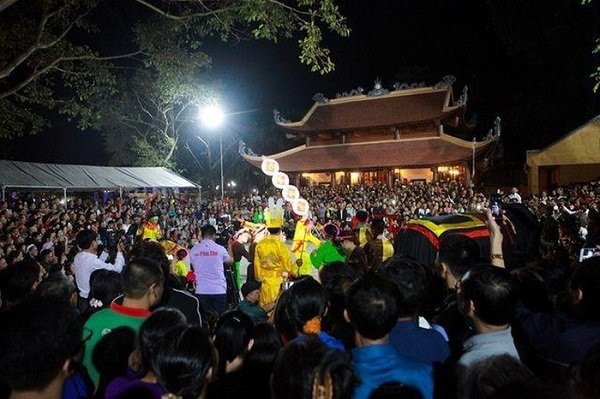 Since the dawn of time, the mortar and pestle have been instruments that touch the peasant of Southeast Asia very closely and that obviously symbolize the male and female reproductive organs, and the action of pounding rice, the sexual act. On the bronze drums, we see many images of boys and girls pounding the rice as a couple.

If we do not understand the relationship between the pounding of rice and the cult of fertility, we will not be able to understand the custom “Gia coi don Dau” (pestle blows in the mortar to welcome the bride): The bride’s family arrives, we give a few pestles in the mortar before bringing her into the house, it is the wish of the young couple to have a large family. We will not be able to understand further this habit of some ancient villages where boys and girls make alternate songs by tapping into a mortar (empty) with a pestle. Certainly to mark the rhythm, but apart from keeping the tempo of the song, this act must reflect the wish of young people to be able to unite and have children. And we will also not understand the game “cuop cau” (wrestling for the ball) an original Vietnamese game, very popular in the region of Phong Chau (Phu Tho) and the surrounding area, where two teams seek to seize a red cotton ball (yang) and then put it in a hole (yin).

The role of the cult of fertility is so important in the life of ancient Vietnam that the bronze drum, the symbol of power, is at the same time symbol of all its aspects of this cult: The shape of the drum was elaborated from the mortar to pound the rice, the drum is hit as the rice is pounded, by typing with the long mass held vertically, as shown by the engravings on the drums themselves. On the facade of the drum, a sun darting its rays symbolizes the male power and between the rays, there are oval shapes of leaves with a slit, symbol of the essence of the female
Even representations that one might think are far removed from these beliefs, such as the very famous One Pillar Pagoda in Hanoi,, the pagoda itself is square (yin), perched on a cylindrical wooden pillar (yang) planted in a square basin (yin) which, in Ly’s time, was itself enlivened by a round basin (yang).

The brush tower (Thap But in the shape of a pestle – yang) and the tribune of the inkwell Ngoc Son; or the round window (yang) which represents the constellation Khuê in the pavilion “Khuê van Cac” (in the temple of literature) which is reflected in the square basin (yin) for example explain this veneration of fertility.

Moreover, in all places of worship, there is often, compared to the altar of the ancestors, a metal bell on the right and a wooden drum on the left. This simple fact was born both from the theory of the Five Principles and from the belief in fertility: The wood, from the princepe Moc, is placed on the left, the East, Yang. The metal, from the Kim principle, is placed on the right, the West, Yin. The sound of the wooden bell, grave, must be mixed with the metallic one of the bronze one: without man and woman, without a harmonious mixture of Yin and Yang, there can be no eternal life.

Even the gong, a musical instrument of Vietnam’s ethnic minorities, which imitates a woman’s chest, is also a symbol of femininity. There is a proverb that says: “Lệnh ông không bằng cồng bà” (Mister’s alarm cannon is not as strong as Madame’s gong). 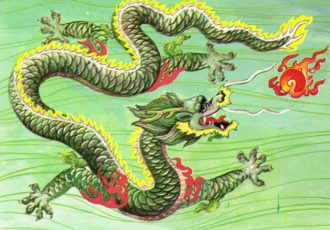 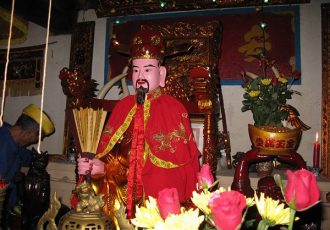