The rites of mourning in Vietnam allow expressing two sentimental antagonisms: The regret of a loved one and the desire to prepare for him a proper trip to the other world. 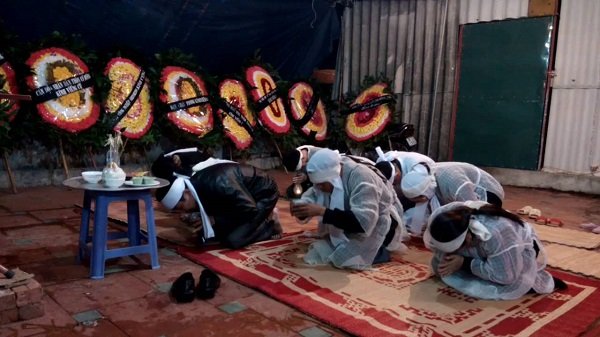 The spirit of the Vietnamese

The belief in man’s parallel existence of a material body and an impalpable soul that, after death, would go to the “other world” and the habit of living for the future (a consequence of the Ying-yang philosophical way of thinking), make the Vietnamese await death with calm and serenity.

We prepare ourselves meticulously, scrupulously to welcome his death or that of the loved one and to bid him farewell at the time of the journey to the eternal. Dying old is thus considered bliss. It is said: Tre lam ma, gia lam hoi (for the young, funeral, for the old, ripples). In some places, when an old man dies, firecrackers are burst, and great-grandchildren and great-great-grandchildren mourn in red and yellow.

In general, the elderly themselves acquire co hau (together for the last trip) or co tho (longevity set). In Vietnam, the coffin is a parallelepiped with a square section, symbolizing the yin world, i.e. the afterlife according to the yin-yang philosophy. In the West, the coffin is a hexagon with two non-identical ends, depending on the morphology of the body.

Some take the precaution of making a quach, i.e. an additional envelope to the coffin. The phrase “trong quan ngoai quach” in Vietnamese means “coffin inside and quach outside”. It is used to talk about the thoroughness with which a funeral was prepared.

At the last moments of a person, the most urgent is to give him a name hem or thuy that is to say a posthumous name. It will be the last name that the deceased has designated himself during his lifetime, or chosen by his descendants. This posthumous name is then known only to the dead, his heirs and the god protector of the home. This is to prevent wandering souls from mingling or substituting for that of the deceased during commemorative ceremonies. During rice offerings, for example, when the heir responsible for worship invokes the soul of the deceased, he calls it by his name hem. The tutelary god only lets in the one who responds to this name. That is why this name is still “the offering of rice”.

Before the shroud is wrapped, there is the ceremony of washing the deceased. A pinch of sticky rice is put in the mouth for food. Money is also given to the deceased to pay for the boat ride to the afterlife. During the operation a piece of cloth is put over the face of the deceased to prevent him/her from seeing the sadness of his/her relatives. In the coffin, since the time of the Hung kings, it has been customary to share goods with the deceased in the form of real or symbolic objects. Nowadays, Vietnamese people are used to put small personal objects such as combs and mirrors in the coffin….

Once this ceremony is over, a bowl of rice is placed on the tomb topped with a hard-boiled egg, with a pair of chopsticks (planted in the rice). In some places, a small straw twist is added to it. This custom has a deep meaning a wish, a wish: The straw twist symbolizes the chaos from which the Great Pole is formed which is represented by rice. The great pole generates the Two Powers (yin and yan). Finally, life is symbolized by the egg.

The whole is based on the philosophy of the origin of life as it is written in the Book of Mutations proclaims the wish to see the soul of the disappeared reincarnate quickly.

After the mourning (three years but in practice 27 months) for the serenity of the soul of the dead, who will be able to watch over the descendants, ensuring their health and prosperity, we have the custom of changing sepulchre. After the coffin is opened, the bones are collected, cleaned with scented water and transferred to a small earthenware container that is put back in the ground in a place chosen in advance according to precise geomantic criteria.

In mourning, Vietnam is torn between two extremes: On the one hand, the philosophical point of view considers death as the passage to another world, another life and the funeral ceremony is only a kind of farewell and the procession is to accompany death on the way of its journey. On the other hand, it is simply the prosaic view of the loss of a loved one and the funeral is to express regret and pain.

The regret that commands the descendants to want to hold back the dead: This tendency is symbolized by the custom of calling the soul of the deceased. We climb on the roof of the house with a jacket of the disappeared and his three souls and his vital supports (seven if it is a man and nine if it is a woman).

Mourning rites reflect the importance of regret and the feelings of family members according to the degree of kinship with the deceased. The colours of mourning are white and black: the worst colours according to the “five principles” (for the peoples of South-East Asia). The children wear very loose clothes, the boys also wear a straw headdress and lean on a stick, the girls and the boys keep their hair clean, with a mu man (a kind of burnou made of hemp cloth) on their head and a piece of cloth over their face. During the procession, it is customary to roll on the ground. Small children and relatives wear white turbans. After the burial, during the mourning period, the offspring continue to wear the turban, unhemmed clothes, and the seam on the outside. The headdress is no longer worn and people walk barefoot…

In the field of funeral ceremonies, we also see the community character clearly emerge: On these occasions, people from the neighbourhood never fail to come and give a hand or advice, either for formalities, because family members, often blinded by grief, no longer know where to turn. In Vietnam, it is often said: “Ban anh em xa khong bang mua lang gieng gan” (it is better to sell distant relatives to buy close neighbours). This is true and it happens that people in the neighbourhood mourn the deceased “Ho duong ba thang, lang gieng 3 ngay” (between parents, we mourn for at least 3 months; between neighbours, it is at least 3 days). The peasant who is very close to the land has close relations with nature, which is why, sometimes, at the death of the master of the place, the trees are made to mourn by hanging white ribbons on the trees. 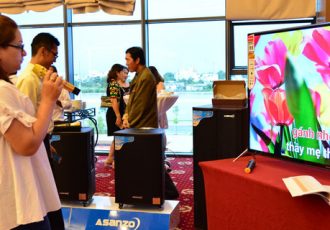