Hoan Kiem Lake is considered the jewel of Hanoi, just like the Eiffel Tower for Paris. It is not only a must-see site for visitors but also an important historical monument of the capital. But above all, Hoan Kiem Lake is the emotional image that each Hanoian holds dear.

It is not a very wide or very deep lake: its average depth is around 1.2m. Spreading over an area of ​​12 ha, Hoan Kiem Lake is located in the heart of the district of Hoan Kiem, which is named after him. It connects the two districts: the old quarter and French architecture.

No one knew how long the lake existed. However, according to the Trung Do Do map dating from 1490, our capital was still at that time immersed in immensity. The lake was actually the bulge of a tributary of the Red River, which passed through Hang Dao street, continuing through Hai Ba Trung, Ly Thuong Kiet streets, and finally returned to the Red River through Hang Chuoi street. Its waters were permanently green, hence one of its former names Luc Thuy _ literally Green Waters.

The name of Hoan Kiem and the legend

Despite its many old names, the lake received its current name, Hoan Kiem – literally “Lake of the Restored Sword”, in the 15th century (approximately 1428), from the following legend:

During the war against the Ming invasion, Le Loi was a close friend of the fisherman Than. One night, Than came home disappointed, for each time he cast his net, he once in a while grabbed an iron bar, but he brought it back anyway. A few days later, when Le Loi was visiting Than, the iron bar suddenly began to glow. Than offered it to his friend, and after polishing, the iron bar revealed itself as the blade of a sword. Le Loi found the words “Thuan Thien” – which follows the decisions of God, and “Lai” _ his name were engraved there. Le Lai had also found a handle when he climbed up a tree to retreat from the enemy. Both sides were in perfect fit, and the sword helped Le Loi win his war. After his coronation, during one of his walks in 1428 on Ta Vong Lake, King Le Thai To saw a giant golden turtle approaching his boat. His sword, at the same time, began to move.

The king took the sword in both hands and held it towards the tortoise. She grabbed it and dove into the water.

The lake was therefore renamed Hoan Kiem, which means “the restored sword”. This myth of the sacred turtle is also reinforced by the existence of a unique species of the turtle: The Hoan Kiem turtle – with the scientific name Rafaetus Leloii which is supposed to be able to live up to 700 years. There are still scientific discussions on this, as some biologists believe that the sole living specimen in the lake belongs to the species Rafaetus Swinhoei, of which only 4 specimens remain in the world.

Being the heart of Hanoi, Hoan Kiem Lake is surrounded by several historical and heritage monuments. 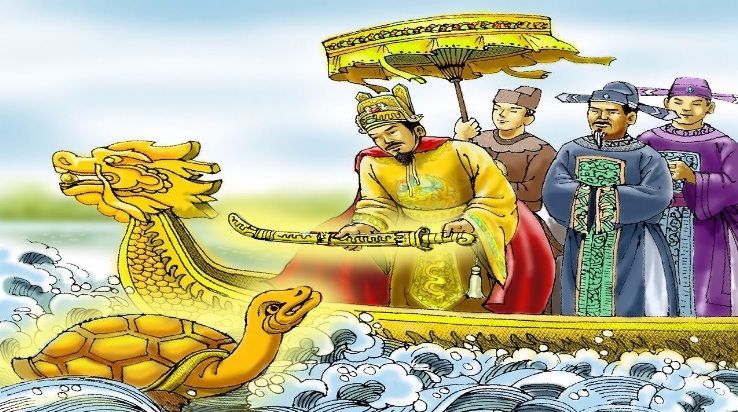 In the middle of the lake is the Turtle Tower, built on the Turtle Islet which has an area of ​​350m 2 . Its construction was carried out in 1886 by Nguyen Ngoc Kim, a Vietnamese mandarin who was at that time the mediator between the French and the Vietnamese. The tower is an excellent combination of French Gothic architecture and the original Vietnamese one. It consists of 2 floors, the first of which is the retracted version of the ground floor, and the second has the form of a belvedere. The ground floor and the first floor are built in a rectangle, with pointed arch doors – the identifying feature of Gothic architecture. While, the gazebo is only 4m 2, but built strictly according to Vietnamese architectural rules, with the roof of four curved angles. During the colonial era, there was a Statue of Liberty, which was destroyed in the 1950s. The Turtle Tower has become a symbolic image of Hanoians and also of the Vietnamese people.

If we go around the lake, starting from its north, we will first encounter the heritage complex of the Ngoc Son temple and The Huc bridge. In Ngoc Son Temple, Emperor Van Xuong, the Taoist God of Literature, and Tran Hung Dao, one of Vietnam’s national heroes, are worshipped. The giant body of a Hoan Kiem turtle, which was accidentally killed by a fisherman in 1967, can also be found there. Ngoc Son Islet and the edge of Hoan Kiem Lake. It was built by the famous scholar Nguyen Sieu in 1865.

Continuing clockwise, the next monument will be the statue of King Ly Thai To, the one who installed the capital of Vietnam in Thang Long – the old name of Hanoi. It was built in 2004 and has since become one of the favorite gathering places for young people in Hanoi. Not far from the statue, one can find the Hoa Phong tower, the only remnant of the Bao An pagoda, which was in its time a large pagoda with 180 compartments. Opposite the Hoa Phong Tower is the Hanoi Central Post Office, built in 1888 by the French. We then meet the Temple of the Kings of the Le dynasty, whose treasure is the bronze statue of King Le Thai Tong, holding his sword towards the lake, as he was returning it to the Golden Turtle. Ending around the lake is the Thuy Ta pavilion, the house above the waters, which is one of the special structures of ancient Vietnamese architecture. The pavilion served as a place of worship for royal families in feudal times. They also organized entertainment activities for the members of the court. 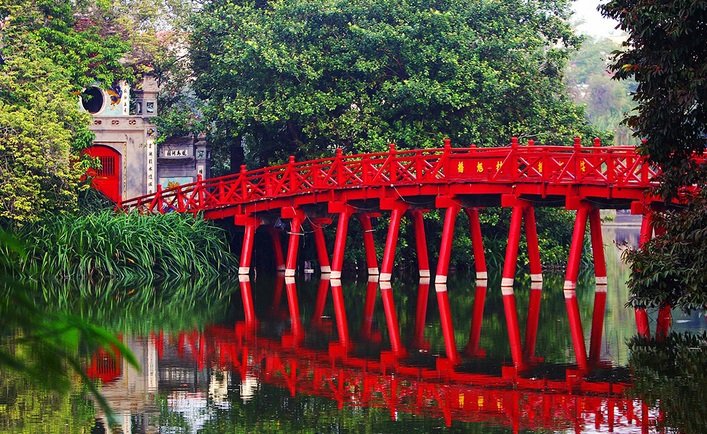 For the past 15 years, Hanoi city authorities have paid much attention to the appearance of the lake and carried out green planning on its shore. Hoan Kiem Lake has therefore become more and more charming thanks to the green space that surrounds it. The willows, the barringtonias around the lake have been used several times in the works on Hanoi.

Hoan Kiem Lake is definitely the tourist center of Hanoi, which not only attract foreign tourists but also people from other provinces. Its historical, architectural and environmental values ​​are irreplaceable and should be carefully preserved by generations of Hanoians. 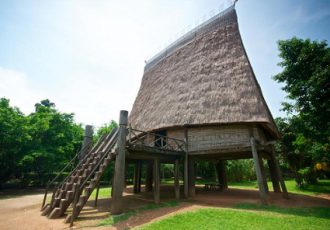 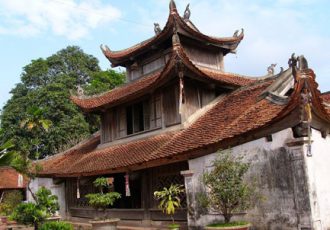